Thankyou for your intrest! 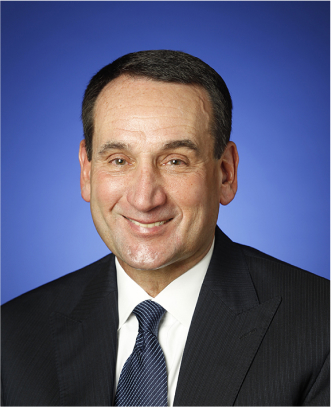 Passionate, dynamic, inspiring and coach of Duke University men’s basketball team who led Team USA to the gold medal at the 2016 Olympic games in Rio, Mike Krzyzewski (known by fans as Coach K) is a master motivator-not only of teams, but of individuals and organizations, spurring them on to succeed beyond even their own expectations. Coach K is also the executive-in-residence, Co-Founder at Fuqua / Coach K Center on Leadership & Ethics at Duke University.

A member of the National Basketball Hall of Fame, Coach K shows audiences how they, too, can compile winning numbers in both their professional and personal lives. The NCAA Division 1 men’s all-time leader for wins as the first Division 1 men’s basketball coach to reach 1,200 wins, Coach K has complied an incredible record of success with an additional 35 NCAA tournament appearances, 12 Final Fours and five National Championships over 46 seasons as a head coach. In 2008 and in 2012, Coach K led the U.S. men’s basketball team to Olympic gold medals, becoming the first coach since Henry Iba (1964 & 1968) to accomplish that feat. In the 11 years of coaching the USA Team, he led them to 3 Olympic Gold Medals plus 2 World Championship Gold Medals in 2010 and 2014.

Coach K maps out a clear game plan for achieving success—motivating, leading and providing powerful strategies for building confidence, trust, communication and teamwork. Like any good coach, he scouts your organization to discover how to best inspire and renew your people. He is the author of two New York Times best-sellers including Beyond Basketball: Coach K’s Keywords for Success. His most recent book is The Gold Standard: Building a World-Class Team. A 12-time National Coach of the Year, in 2011 Sports Illustrated named Krzyzewski its Sportsman of the Year. Krzyzewski has been honored by USA Basketball as the recipient or co-recipient of the USA Basketball National Coach of the Year Award.